Q-PALL is a manufacturer and supplier of plastic pallets. Meanwhile, we have become one of the market leaders in our field. Since our foundation, we have gained a lot of knowledge and experience, which we use to make our pallets even better: more sustainable and efficient, both for the environment and in terms of cost-efficiency. We call it The Orange Values. To help you make an informed choice, we would like to explain some of the key concepts you will undoubtedly come across when looking for the right pallets.

The edges of the pallet are not sharp and angular, but round. This allows straps, pallet trucks, and forklift trucks to do their work without damaging the pallet or even being damaged by sharp edges.

The basic dimensions of a pallet are shown in width (01) and length (02). The height (3) affects the hardness of the pallet: the higher, the harder. Consequently, higher pallets also have a greater load-bearing capacity. Average commercial pallets are between 120 and 160 mm high. The ground clearance (4) is the height of the gap between the top deck and the bottom of the pallet. Normally it is 89 mm, 95 mm, or 100 mm. The spindles (5) are the 'support beams' of the pallet. The width of the coils is determined by the automated transport systems, where the rule is that center coils must not be wider than 150 mm. The entry width (6) takes into account the distance between forks of forklift and pallet trucks according to ISO 6780 standard dimensions.

Loads must stay in place. Some packaged products are very slippery by nature and can slide around on a normal pallet. Special anti-slip pallets have been developed for such loads. They prevent loaded goods from sliding during transport and also ensure that empty, stacked pallets are more stable. Anti-slip pallets are made of a special TPO polymer. TPO polymers, also known as TPE-O, stand for Olefin-based Thermoplastic Elastomers. These elastomers are used when conventional thermoplastics such as PE and PP do not meet the desired requirements of wear resistance, toughness, or friction. Because of the TPO polymer, the contact surface of the anti-slip pallets is significantly stiffer and very suitable for keeping slippery loads better in place.

Plastic objects, including plastic pallets, can become statically charged by friction on contact. This charge disappears in contact with another type of material. You experience this in everyday life, for example, when you get an electric shock when you open a car door. With pallets, this static charge is very undesirable. Statically charged objects attract dust, which can affect shelf life or quality. Electronic products can even be irreparably damaged by static electricity. Therefore, Q-PALL has special anti-static pallets. These are provided with a balanced combination of synergistic anti-static additives that directly reduce the surface conductivity of polyethylene. The surface resistance of

Q-PALL pallets can be personalized, for example, with your logo, so that they are clearly recognizable as company property. We do this by hot stamping, die-cutting, or screen printing.

A load of a pallet has to do with its carrying capacity (link to that keyword). It says something about the weight that a pallet can carry. We distinguish between three concepts:

Dynamic load
The dynamic load is the maximum load on a pallet during transport with a forklift or pallet truck, with an evenly distributed load on the pallet. 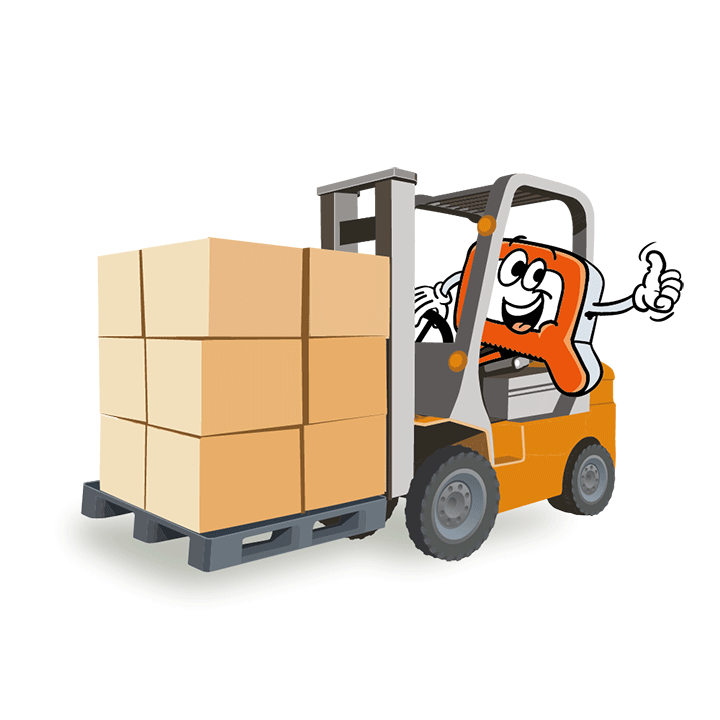 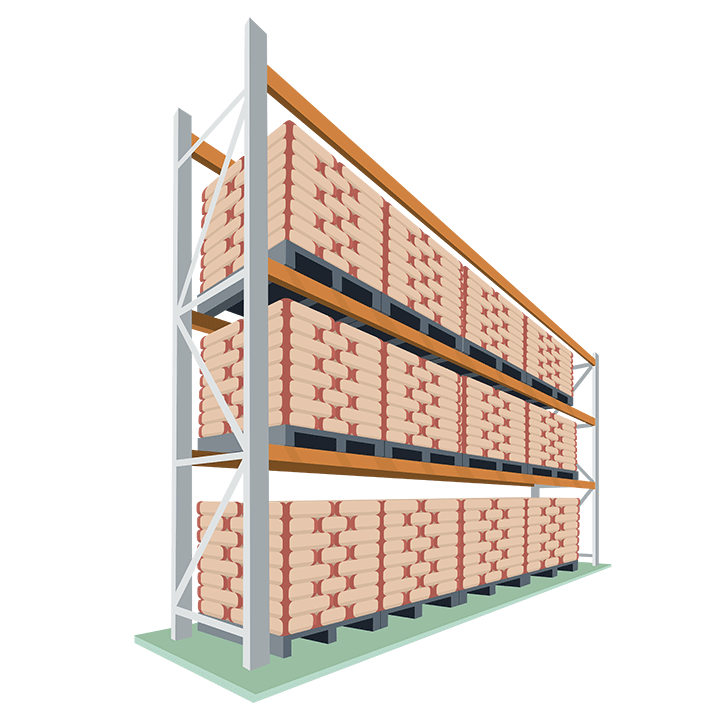 Static load
The static load is the maximum load a pallet can bear when placed on a flat surface. If several pallets are stacked, the total weight determines the load on the bottom pallet.

These are located on the underside of a plastic pallet and are actually what the pallet rests on, a slide or legs. Bottom supports are almost more important than the surface of a pallet, as they affect its stability and functionality. Whether a pallet is stackable and/or nestable is also determined by the bottom supports.

The loading surface of a pallet. Choice of the perforated upper deck or closed upper deck:

Pallets with a perforated upper deck
With openings in the upper deck. The advantage of this is that the pallets are lighter and promote air circulation. This makes them suitable for refrigerated areas.

Pallets with a closed upper deck
Have the advantage that the load cannot seep through to the underlying pallets. Fewer pressure spots on the goods.

Indicates the environmental impact of plastic pallets, expressed in kilograms (kg CO2 eq.). Environmental Product Declaration (EPD) documents are available for all types of plastic pallets. Greenhouse gas emissions have a negative impact on the climate. Most CO2 emissions occur during the extraction of raw materials, transport, and production of finished products. Q-PALL contributes to CO2 reduction by minimizing these emissions in all steps of the process, from production to recycling. Read more about The Orange Values

The way pallets are manufactured, usually by injection molding. Within this, two categories are distinguished:

Monoblock pallets
One-piece pallets. Applies to almost all nestable plastic pallets, but the name is mainly used for pallets with one-piece slats.

Pallets consisting of two or more parts
The parts of these pallets are only joined together after injection molding. This is done by welding, gluing, screwing, or a clip system. Examples of these types of pallets are hygienic pallets for foodstuffs and pallets with clip-on slats.

Deep-drawing
Production technique that forms a mold by shaping metal with a press. Used less frequently than injection molding.

Indicates the maximum total weight a pallet can carry, how heavily a pallet can be loaded. The better the construction of a pallet, the higher its load capacity in relation to its own weight. The load capacity is one of the most important criteria to base your choice on. However, capacity says nothing about quality; what matters most is that it matches the area of use.

ESD stands for 'electrostatic discharge', electrostatic discharges with a lightning-fast miniature spark. This can happen when a statically charged object comes into contact with a conductor. Plastic pallets can become statically charged through minimal friction with the load, for example. In explosion hazardous environments, this poses a major risk in terms of ESD. ESD can also cause premature failure of electronic goods, which is also very undesirable. Q-PALL, therefore, has ESD-safe pallets in its range. These pallets based on HDPE or PP polymer resin with special carbon black products can be produced to meet your requirements. The achievable resistance levels are

The material from which pallets are made. Q-PALL distinguishes three categories Budget, Regular, and Premium

A rounded corner profile makes it easier to apply the stretch film. Protects the pallet from damage caused by forklift trucks, pallet trucks, or straps.

Type of warehouse where goods are stored in large quantities in high racking. Often pallets are placed in these racks.

These runners (bottom bars) can be fitted to pallets yourself. This allows the pallets to be stacked during transport, saving space and therefore costs.

Nestable pallets can be pushed together. This is also called 'nesting'. Think, for example, of plastic cups that you buy as a sort of roll of pushed-together cups. Nestable pallets, therefore, take up less space during storage and transport.

Another word for slats. The position and quantity of the bottom slats affect the properties of a pallet:

3 bottom runners
Pallets fitted with three longitudinal runners are suitable for automated high bay storage and transport systems. The runners can be reinforced with metal for the storage of very heavy loads.

5 bottom runners
A perimeter base without a crossbar in the middle makes it easier for forklift trucks to pick up pallets when the pallet is in block stacking.

6 lower bars
Type of floor with 6 runners and across deck that gives a large bearing surface to plastic pallets. This provides optimum protection for the goods under the pallet from pressure spots and other damage. In addition, this floor gives maximum sturdiness, making the pallets very suitable for block stacking.

Pallets with 9 conic feet as bottom supports have the advantage that they are nestable and can be stacked. As a result, they take up 75% less space. Handy for transport and storage. The disadvantage compared to skids is that they can usually only carry loads up to 1500 kg and are not suitable for roller conveyor systems and high-bay warehouses.

The vast majority of plastic pallets worldwide are produced by the injection molding process. This means that plastic is melted and injected into an injection mold under high pressure. The plastic then has to cool down to harden in the mold. Less common production techniques are deep drawing, RTM (Resin Transfer Molding) and rotational molding.

This refers to the ability to stack the pallets in a stable manner. Some pallets are stackable and nestable.

98% of our pallets are made from recycled material. Thus, we take our responsibility in the fight against the "plastic soup", the pollution of our oceans. Q-PALL pallets are therefore a green choice. Wooden pallets need to be replaced after a number of rotations, whereas plastic pallets can be reused several times thanks to recycling, without any loss of quality. We take care of a large part of this recycling ourselves, so we can also respond to our customers' wishes in terms of choice of material. All our products also have a pallet passport, so that you know the exact composition of each pallet. You can always return used plastic pallets to us. Even if they are damaged or if you did not buy them from us. You thus save on the cost of waste processing and contribute to 'green pallets'.

The production process in which two resins are injected into a mold, after which they are allowed to harden. Less common than injection molding.

The production process in which plastic powder is heated in a mold and thus formed into a plastic end product. However, the injection molding technique is used for pallets in many other ways.

Pallets are tested the same all over the world, according to the ISO 8611 guidelines. These tests determine the load-bearing capacity. Pallets undergo the following tests:

Stack test
Also called pressure resistance test. This test determines the static load capacity. The legs or spars and the upper deck are tested separately from each other. As in the other tests, the breaking load is determined first and then the deflection examined. In practice, of course, a load will never exert force on the legs or upper deck alone. Therefore, the static load capacity is mainly used as a guideline.

X-Ray fluorescence is a method to analyze the elemental composition of various materials such as plastics, metal, or soil. The advantage is that the method is non-destructive, very accurate, and very fast. The XRF gun is widely used in the polymer and plastic industry. Q-PALL uses this method to confirm that the products comply with the RoHS (Restriction of Hazardous Substances) directive. This control of hazardous substances as described in the RoHS directive fits into our vision of sustainability and quality.

A problem has occurred.

We have not found any search results yet.
Categories
Products